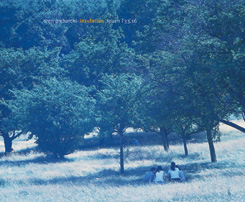 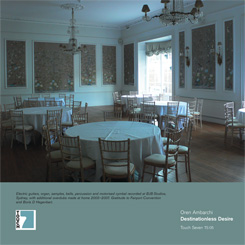 Destinationless Desire
Oren Ambarchi
[Touch # TS05, 2008]
7″ vinyl – 2 tracks
Side A: Highway of Diamonds 5:55
Side B: Bleeding Shadow 6:38
Electric guitars, organ, samples, bells, percussion and motorised cymbal recorded at BJB Studios, Sydney with additional overdubs made at home 2005-2007. Gratitude to Fairport Convention and Boris D Hegenbart.
This is the 5th in the series of Touch Sevens – 7″ vinyl only releases.
7″ vinyl was the quintessential format for popular music. Today, it is an undervalued and mostly promotional medium, used as a fetishistic signpost to a time of musical authenticity and a “healthy” popular culture. It might seem like another retrograde step to launch a vinyl series just as the download format threatens to dominate, and indeed there is an element of “the rear view mirror”… the generation of Touch artists who grew up with vinyl [and cassette] still feeling a strong emotional attachment to it. This series is more than that… an overtly critical, non-digital statement is supported by treatments of audio work which cannot be applied to digital formats – the sonic texture, the use of a locked groove, the A & the B and the additional dimension of the visual counterpoint. As for the aspect of audience participation, we choose not to specify the RPM on the label, encouraging the listener to experiment with playback options and personal preferences. An attempt to make music that works at both speeds. The front cover might actually be the back cover…

In The Pendulum’s Embrace
Oren Ambarchi
[Touch # TO:78, 2007]
CD – 3 tracks
Oren Ambarchi continues his otherworldly investigations with “In The Pendulum’s Embrace”, a dark twin to his landmark 2004 album “Grapes From The Estate” [Touch # TO:61]. Returning again to the hallowed halls of BJB Studios in Sydney, Ambarchi expands the scope and range of his unique musical language, incorporating an even broader pallette of instrumentsand sensibilities. Despite the use of glass harmonica, strings, bells, piano, percussion and guitars, it’s startling that the world created is still unmistakably his own, and that there is such a cohesion of vision throughout the albums’s three lengthy pieces. With this record there’s an even more tenuous coexistence of fragility and density; sounds as light as air mingling with wall shaking low-end. The converted already know the kind of trance-inducing euphoria of Ambarchi’s music. Newcomers will be scouting the back catalogue… 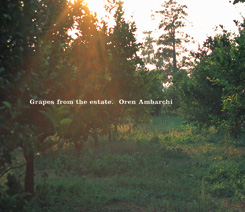 Grapes from the Estate
Oren Ambarchi
[Touch # TO:61, 2004]
CD – 4 tracks
Oren Ambarchi’s third solo project for Touch [after Suspension and Insulation] sees him reaching beyond the work for electric guitar that he’s become recognised for, expanding his palette and taking his investigations into another sphere entirely. Grapes from the Estate features new instrumentation (strings, tuned bells, percussion and others that can only be guessed at), but the singular and unmistakable influence that Ambarchi exerts on these new materials is what makes it such an indelible work.
There is a reconciliation of his love of song-based music and his determination to deal in pure sound. The result is a work that truly eludes such arbitrary definitions. Grapes From The Estate is an all consuming experience that draws the listener out of an ordinary sense of time, into a world beyond it.
On more than any other release, his entire body of work to date can be experienced in a single statement. There are the seemingly random tonal structures that are such a large part of his vocabulary, the playfulness and humour of his formative noise schooling, his love of free jazz, of pop music, and rhythmic elements, perhaps subconsciously derived from his Sephardic heritage. Another outpouring of personal, intimate and enduring music from Oren Ambarchi. 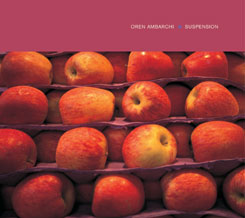 Suspension
Oren Ambarchi
[Touch # T33.18, 2001]
CD – 6 tracks
Oren Ambarchi is an electronic guitarist and percussionist with longstanding interests in transcending conventional instrumental approaches. Born in Sydney in 1969, he has been performing live since 1986. His work focuses mainly on the exploration of the guitar, re-routing the instrument into a zone of alien abstraction where it’s no longer easily identifiable as itself. Instead, it’s a laboratory for extended sonic investigation. He has performed and recorded with Martin Ng (Australia), Christian Fennesz (Austria), Otomo Yoshihide (Japan), Pimmon (Australia), John Zorn (USA), Voice Crack (Switzerland), Sachiko M (Japan), Keith Rowe (UK), Phill Niblock (USA), Günter Müller (Switzerland), Evan Parker (UK), Toshimaru Nakamura(Japan) and many more. He recently toured with sunn0))), also contributing to their ‘Black One’ album from 2005.